At jjcountrylifeart we are always keen to buy the artwork of Charles Frederick Tunnicliffe.

Charles Frederick Tunnicliffe was born and bred on the land and spent the first nineteen years of his life in the beautiful countryside of East Cheshire.  Tunnicliffe studied at the Macclesfield School of Art where he won a scholarship to the Royal College of Art in London, gaining his teaching diploma and a further scholarship to study at the RCA’s new Etching and Engraving School.

In 1923 his excellent work rewarded him with a diploma gained with distinction.  Charles Frederick Tunnicliffe stayed on in London to develop a career as an etcher and engraver, producing some of his finest work during this time. In 1928 he returned to Macclesfield, earning his living mainly from commercial artwork, much of it associated with the farming industry. Charles Frederick Tunnicliffe had a long association with Henry Williamson, illustrating such famous novels as Tarka the Otter, Salar the Salmon and the Peregrine’s Saga, along with a further five other titles. In the early 1940’s he took up a post at Manchester Grammar School, as a teacher of Art – he visited Anglesey during his holdiday breaks.

Tunnicliffe was a regular contributor to the Royal Academy and was elected as an associate in 1944, becoming a Royal Academician in 1954. He took great pride in exhibiting his work at the Royal Academy, and in 1974 his  work was shown in a much acclaimed personal “Members Exhibition” at the RA.  Tunnicliffe and his wife Winifred moved from Cheshire to Anglesey in 1947, to live at Shorelands in Malltraeth, where he lived until his death in 1979.

He was a very skilled artist in a wide range of media and his work was used to illustrate many magazine articles, books and advertisements. He created a superb personal collection of measured drawings of birds and was a major contributor to RSPB Bird Notes. He also took on many private commissions.

Charles Frederick Tunnicliffe was a very special man who worked extremely hard and loved his work. His output was prodigious, but he will also be remembered for his exceptional kindness, modesty and generosity. The RSPB awarded him its Gold Medal in 1975 and he was also honoured with an OBE in 1978. 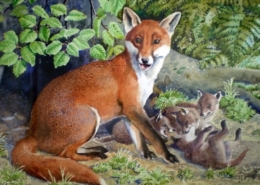