At jjcountrylifeart we are keen to purchase the artwork of Colin Burns.

Colin Burns has always had a compulsion to paint and sketch and even as a child his talent was instantly recognised. In his later childhood living on the edge of the Norfolk marshes he found inspiration in the landscape and wildlife that surrounded him.  As he grew older he came to know and admire the work of another Norfolk based artist John Cyril Harrison who further fuelled his passion for both birds and art.

Colin Burns early adult life was spent as an accountant but he continued to paint and sketch the East Anglian landscape.  He finally decided to paint full time and  conducted a highly successful one-man exhibition in the West End of London.

Since then Colin has never looked back.  His skill enables him to create the most wonderful light and atmosphere in his paintings and consequently his work has enjoyed enormous success in some of London’s top auction houses and galleries.  From the early evening glow of a snow-laden landscape in Scotland to a Norfolk dike in summer with Moorhen and Coot scuttling around Colin Burn’s paintings can transport you.  His work is keenly collected throughout the UK and North America. 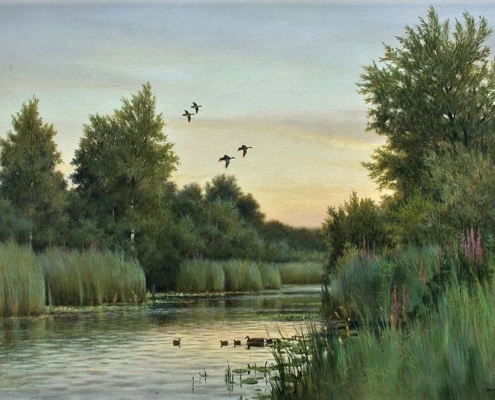