Roland Green was born in Rainham Kent and was the son of a taxidermist.  He was educated in Rochester and the Regent Street Polytechnic where it became evident that he had gift for painting birds and mammals. He developed a deep love and interest in all birds and particularly those which inhabited Norfolk where he lived.  He decided to annually exhibit his paintings and soon enjoyed a considerable following.

It was Lord Desborough who commissioned Roland Green to paint a frieze at Whiteslea Lodge depicting the birds at Hickling Broad. 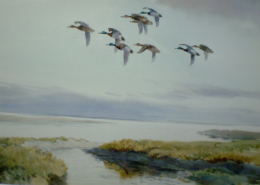