Eric Ennion was born on 7th June 1900 at Kettering in Northamptonshire, the son of a country doctor. In 1904 the family moved to Burwell, nine miles north-east of Cambridge, on the edge of the fens.  Eric Ennion followed his father by studying medicine at Caius College and St Mary’s Hospital and then he joined his father’s practice in 1926.

From his early childhood he was fascinated by birds and by drawing them.  As an artist Eric Ennion was entirely self taught and his passion combined with his undoubted talents led to his first one man show at the Greatorex Gallery in London in 1937.  His great skill was in his ability to depict the character of his subjects with just a few well placed brush strokes.  His simple but effective style was admired by artists and collectors alike and he went on to author and illustrate eleven books.  Eric Ennion’s work has attracted many collectors both in England and abroad. 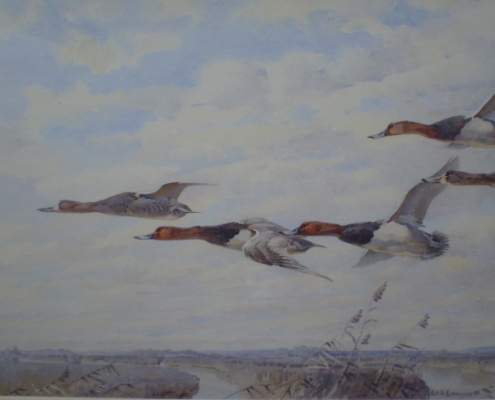